With this weeks’ announcement of Noel Gallagher’s new album ‘Who Built the Moon?’ and Liam’s first solo record set to drop next week we now have a full house of imminent Gallagher releases for 2017.

But what should we expect from the two albums?

Liam Gallagher – ‘As You Were’

Fanfare around Liam’s new album has undoubtedly been higher than that of Noel’s. The typically brash title ‘As You Were’ was announced back in March and preceded the release of debut single ‘Wall of Glass’.

The stomping track was popular and was followed by a string of live dates including a visit to Dublin’s Olympia Theatre and a surprise appearance at the One Love Manchester benefit gig (Liam performed with Coldplay’s Christ Martin, whom he had amusingly once labelled a “geography teacher”, a “vicar” and a “plant pot”).

Further singles ‘Chinatown’ and the hands-in-the-air ‘For What It’s Worth’ have been well received too, and interviews with outlets like Noisey, Radio X and NME have flooded social media with a new swathe of memorable Liam soundbites.

Never a prolific songwriter, Liam has been open about working with other writers on ‘As You Were’, and four tracks were produced by Adele/Beck collaborator Greg Kurstin.

The singles released thus far would suggest a record close to Liam’s roots, which should be no surprise; he has never been one to make bold forays into the musical unknown, preferring to stick with the straight up rock ‘n’ roll he so cherishes.

While Beady Eye only occasionally found the mark during their short existence, signs so far indicate a consistently strong solo debut, albeit one without many surprises. It is released next Friday 6th October.

Noel Gallagher – ‘Who Built the Moon?’ 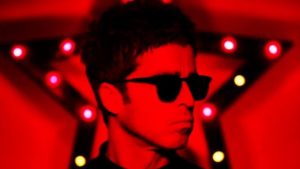 Media hype around Noel’s new record has been a little more muted, as has the man himself. In an interview with Russell Brand on Radio X this summer Noel seemed casual in throwing out the slated November release date, but revealed little else about his third record with the High Flying Birds.

However, the awaited announcement finally came this week with the revelation of the album’s title and November 24th release date. The announcement also included a UK and Ireland Tour in 2018 which will see Noel come to The SSE Arena Belfast and Dublin’s 3Arena on May 9th and 10th.

No singles have yet been released from the record, but snippets of songs feature in the album’s official trailer.

Speaking on Absolute Radio Noel spoke of how album producer David Holmes pushed him outside of his comfort zone, preventing him from re-using old riffs or demos during sessions in Belfast.

The trailer certainly sounds little more psychedelic than either of Noel’s previous efforts, with hints of altered vocals and the eerie-sounding echoes of a French intercom announcer. I’m not fully convinced that Noel is gone full-on psychedelia with this album, as seems to be suggested elsewhere – stretching the psychedelic boundaries only exists within a certain range with Noel Gallagher who, like his brother, has never ventured too far from his area of musical expertise.

That said, both records Noel has released since Oasis split have been of high quality, and the indications are that this one might veer far enough left to make the album fresh while retaining the staples of Noel’s well-oiled sound.

But will there be an Oasis reunion?

Of course, questions of a possible Oasis reunion are never far from the lips of interviewers, but with both brothers now hitting the solo trail nothing seems on the immediate horizon.

For his part, Liam has said he would “love nothing more” than for the pair to be speaking about a reunion, but admits they will have to “get back to being brothers” before any Oasis talk would be on the cards.

He also says the verbal and online feuding has “become a sport now” between the two and says he enjoys poking fun at his older sibling.

Liam or Noel: Who’s album will come out on top?

An Oasis (or even Gallagher family) reunion, then, seems far off, but at least we have double the musical output to look forward to before Christmas.

check out Liam’s new song below.