Unity on Arklow Musician And Rapper Oisín Mac Giolla Bhríde who was born in 1993 at the Rotunda maternity hospital, Dublin. He was then raised in county Wicklow.

Our man Thomas caught up with Oisín to ask him a few questions to get to know him a bit more, his influences and where he started.. 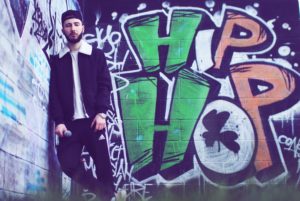 When and why did you start playing?

Which instruments do you play?

I mainly produce all my music in a DAW on a laptop with a full sized midi keyboard, drum pad and synths and haven’t regularly played an instrument for a long time , so I don’t really play any instrument to a very high standard at the moment, but I can (to some extent) play the piano, drum machine, cornet, recorder and the bodhrán

What was the first tune(s) you learned?

“Frero Jacka” on the piano, “Three Blind Mice” on the recorder and “She Moved through the fair” as regards vocals

Is your family musical?

They are. My ma’s always singing around the house, my Grandmother (her mother) was a singer in her younger days, singing on Raidió Teilifís Éireann and was also always involved with the local silver-band well into her 80s and all my uncles on that side of the family also play various instruments. For as long as I can remember, my house has been full of old Rack-systems, turntables, speakers, wires and vinyl records. There was always music playing

I grew up around Reggae, ska and the whole sound system culture. There would also be punk, soul, rock and synth pop playing constantly and my mother would often be singing traditional Irish songs

Which famous musicians do you admire? Why?

Which famous musicians have you learned from?

Too many to name, I’m an eternal student of the Older Gods of Hip Hop

Who was your first teacher? Other teachers?

My Granny was my first teacher. I used to go to my Grandparents house every day after school when I was young and my granny would teach me the piano. She also used to teach me Irish, English and Maths before I ever started school.

Describe your first instrument. Other instruments.

One of my earliest memories is driving to Tallaght to look at a piano to buy. I would say I really started taking music seriously though in my mid teens when someone in my year in school gave me an old cracked copy of a DAW and I started producing Hip Hop, Dubstep and DnB

What are your fondest musical memories? In your house? In your neighborhood or town?

I was at a 10 year anniversary gig of a north Dublin Hip Hop record label called “Working Class Records” in a dublin music venue called the twisted pepper (Now closed down). That gig really felt like experiencing history in the making, the emcees were all so gully and raw yet technical and intelligent, the sound system was great and the entire building was shaking with the bass lines of the dusty boom bap tracks. The room was dark except for the stage and the air in the room was thick with cannabis smoke. There was a real sense of community in the crowd too, not one bit of trouble. I grew up on Irish Hip Hop and that gig will always stand out in my memory.

Were you influenced by old records & tapes? Which ones?

I was, my house is full of old vinyl records. Everything from Diana Ross, to ESG, to Dickens (1960s France), to Bob Marley, to House of Pain, to Curtis Mayfield, to Miles Davis, to Csárdás, to Charles Mingus, to Baby Huey , to Aphrodites Child, to Animals, to Lolipops, to Ethiopian soul artists like Bahta Gébré Heywét, Wededku and Tiahoun Gessesse

Who are your favorite musicians? Groups? CD’s?

Do you perform in public? Describe those occasions? Concerts, radio, TV?

I do, I’ve played various gigs all over Ireland. Things like Reic, a bilingual spoken word, poetry and Hip Hop night in Dublin and Derry. An G-spota, an Irish language night run by Irish language group Misneach in Dublin, and various other gigs in Wicklow, Waterford, Galway and County Meath. I’ve been live on Raidió na Life (Where I also broadcast every week) and RTÉ Raidió na Gaeltachta. I’ve also performed some accappela versions of my stuff at a commemoration for Máirtín Ó Cadhain. I’ve also done various vlogs and online videos

How do you handle mistakes during a performance?

If it’s a small mistake I just smile and carry on. If I was to make a big mistake I’d tell the DJ to restart the track and tell the crowd to join in and help out

Do you get nervous before a performance?

Rarely, I work as an actor in front of reasonably large crowds, broadcast live on the radio every week and have a decent amount of experience doing gigs to various types of crowds in various venues so I’m used to performing. Also, it’s when I get to showcase my music and abilities and that’s always a great opportunity and I love feeding off the energie of a crowd, so I don’t think of it as a scary thing I have to do, but rather a great thing I get to do

What advice would you give to beginners who are nervous?

If you’re really confident in your ability and the work you’ve put in to your music, then you’ve no reason to be nervous. The crowd is there to hear what you’ve got and will usually be supportive. The live skills will come with time, in the meantime you just have to pay your dues and get those first couple of gigs out of the way.

Do you attend sessions? What makes a good session?

I do. Na Gaeil (Irish speakers). Gaels tend to be able to play multiple instrument, sing, dance, tell stories and poetry etc, so everyone takes part. we’re also a very lively and friendly group, you often see people Sean Nós dancing on tables by the end of the night (The next morning), and you always learn something.

How often and for how long do you practice?

Wherever and whenever I can, which can be awkward living in a populous area with neighbors on the other side of a thin wall. I usually do some kind of practice every day though.

Do you teach music?

Not yet, I am working on putting together Hip Hop workshops for Irish language schools (Gaeilscoileanna and Gaeltacht schools) though. I’ve previously voluntarily taught Irish language classes

How do you balance your music with other obligations – mate, children, job?

I only pursue things that already fit in with my passions, eg acting, broadcasting on the radio, promoting the Irish language, Hip Hop etc. So for the most part everything falls into place, I do be very busy and can’t always balance everything but I do my best to rearange my schedule as much as possible.

Hi my Name is Thomas I was born and raised in Germany that's nothing special but it is ok. I made my Move to Ireland in 2012 not because of a job, I made this move because of the Love of my life. I'm based in Arklow Co. Wicklow with my lovely Daughter Tegan. My interest are Football German Bundesliga, Movies and Reading. I know Brian a few years. We worked together for the same company. I'm glad to be the newest Member. That's all about my self for now.